I went along to this PRMIA event on Thursday evening hosted by Credit Suisse and sponsored by Acacia Capital. Viktoria Baklanova introduced the panel with Joseph Tenaga as MC for the panel and very quickly got a plug in for her about to be released book written with Joe on money market funds. For those of us who don’t know so much about money market funds, then these are a form of interest-bearing fund that invests in short term debt securities. The funds attempt to maintain a stable Net Asset Value (NAV) but to quote Wikipedia they “are widely (though not necessarily accurately) regarded as being as safe as bank deposits yet providing a higher yield.” Their role in the 2008 financial crisis echos on strongly through to the present day, with controversy of their supposedly stable NAV (typically $1 in the US) and the associated phrase “Breaking the Buck“.

Joe Tenaga started the panel with an (unnecessary in my view) justification of academia, asking the rhetorical question “What is the point of academia?” to which Joe answered that “knowledge is what makes the impossible possible” and he added that knowledge drives us to make things better. Joe introduced the next panelist, Matthew Fink of Oppenheimer Mutual Funds. Matt said that we would be prepared to wager that he had worked in the money market funds area the longest of anyone in the room, having started his involvement in the industry in April of 1971. Matt gave a picture of the mutual funds industry at the time, with around $60B AUM in the US with 95% invested in equities. At that time the mutual funds industry was going through a very bad time, as the economy and markets were falling and fund redemptions were rising to such an extent that they had fallen to $30B over the next few years. At the time, if redemptions had continued at this rate the industry would have vanished. 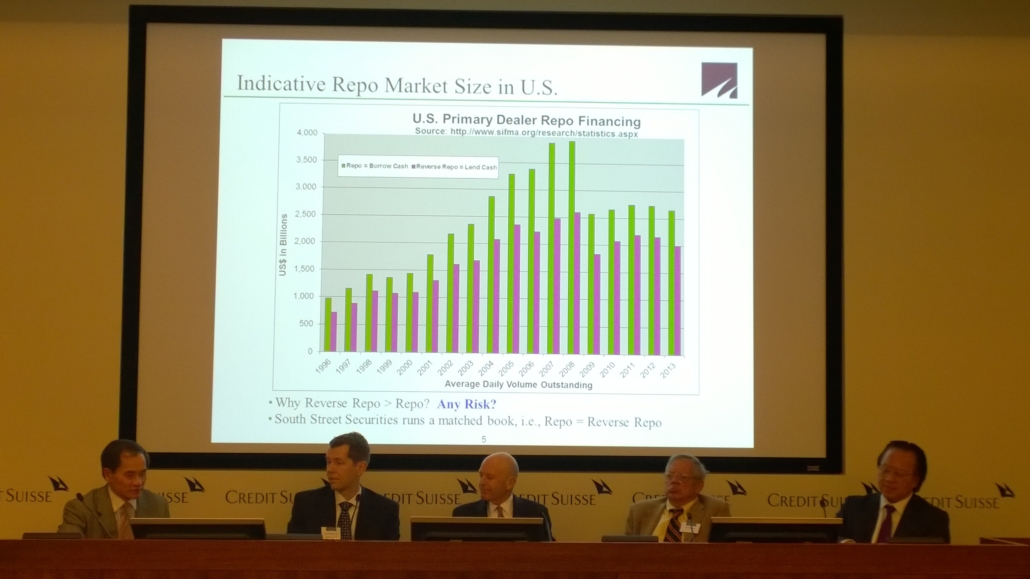 Against this background for the mutual funds industry, interest rates in the US were very high rising from 6% in 1969 to around 12% in 1974. So many people were paying very high rates on mortgage obligations whilst being limited to receiving only 4-5% on savings due to “Regulation Q“. For wealthy individuals, it was possible to get around these savings limits, but only if you had $100,000 to put in a Commercial Deposit or $10,000 into a T-Bill. Ironically it was the regulation to remove one risk (it had been thought that competition on deposit rates had contributed to the bank failures of the Great Depression) that had sparked the drive to innovate to find higher returns and create the money market funds industry as a result, with the first fund being “The Reserve Fund” in 1971. (side comment – if regulation from the 1930’s via the 1970 can cause problems in 2014, then I would have to defer to which ever Deity you worsphip to advise on what the longer-term consequencies will be of the current round of complexity being implemented…).

Henry Shilling of Moody’s took over from Matt and showed a few slides, firstly showing the number of funds with AAA (AAAmmf, Aaamf, AAAmf) from Fitch (49), Moody’s (130) and S&P Ratings (156). Henry described how regulators have wanted to reduce the risk of funds by shortening the maturity of the debt held from 90 to 60 days, and having one and seven day liquidity windows. He showed that there is a high degree of concentration risk in the industry with the top 10 firms have 74% AUM and the top 20 covering 94% of the AUM for the industry. Similarly, looking at the assets invested in the funds, 80% are from financial institutions.

Igor Axenov of Barclays Capital then showed his slides, illustrating the composition of the funds by asset type prior to the crisis:

He said that the largest exposure then was to securitized products, with implicit indirect exposure to banks. Igor said that CDO issuance was rising at a rate of $300B per year through 2005/6/7 and that much of the structuring was done to ensure that the ABS products fitted the needs and regulations of money market funds. Detailing the ABS asset composition, Igor showed:

Igor said the asset backed commercial paper market (largely funded through money market funds) had grown to $1.2Trln by 2007, and has fallen precipitously since then down to around $200M now.

Looking at the current money market fund portfolio, it looks like:

Terence Ma added that the Money Market Fund industry sat at 4Trln in 2008 and was now around $2.7Trln in 2014. Matthew Fink said that given his involvement in regulation that he had “never met the face of the enemy before” in Igor was the start of some lively but well-intended banter between the ex-regulator and structurer.

Terence Ma of South Street Securities described his business, which exclusively involves repurchase agreements “Repos“. Terry said that in the 1990’s Citi were very disciplined on balanced sheet management and in his opinion, then adhead of the market in this regard. He that the Repo business earns small spreads and as a result needs a big balance sheet. When John Read took over Citi, he decided that he did not like the Repo business since its ROE could not compete with some of the products in retail and other parts of the business. So Terry and his partners wondered whether the Repo business could be managed off balance sheet, so they formed a broker-dealer business and when Citi merged with Salomen Brothers they span off. This was December of 2003 but by 2008 they were left “sucking wind” by the crisis.

Terry was quite explicit that his firm is not part of the “shadow banking system” but are subject to the SEC. He then described a few more things about his business, starting with his definition of a Repo as “an agreement to sell and repurchase a security at a fixed date in the future“, with the objectives of providing cash inventory, leverage and short cover. All borrowings are lent out, unlike Lehman Brothers in 2008. They do not finance again structured products unless guaranteed, and only accept collateral from Fannie, Freddie and the US Government.

Joe Tenaga then open out questions to the audience. Someone asked who the first MMF was (I think they missed the first part of the talk) and Matt said that the Keystone MMF filed first but the first was Reserve MMF (which got into trouble in 2008). Matt said that it was interesting that the same people like Paul Volcker were stilled involved with the same concerns about the industry many years on.

The next question was how did early MMFs keep their NAV at $1? Henry said that the “Break the Buck” definition is when there is a mark to market fall of 50bp or more. He said that historically that fund sponsors had addressed any issues with breaking the buck with purchases of the fund at par or direct equity investment in the fund – they did this since the effect on their funds and the industry would be too great to comtemplate. Hence an MMF is not a perfect product but (up until Lehmans in 2008 with a 50% NAV loss) has a near-perfect record. He added that the first funds to break the buck were from Salomon’s and First Chicago.

Matt added some further history saying the need to maintain the $1 NAV was initially due to the needs of some of the early investors in the industry, who could not invest in products unless they had fixed NAV. He mentioned that one of the companies, Federated, had a long running battle with the SEC over Money Market Funds, filing for exemptions to avoid some of the restrictions that the SEC was trying to impose since the SEC regarded the MMF industry as damaging the mutual funds industry. He mentioned Rule 2-a7 which defines the accountancy procedures for keeping the NAV at $1, and some of the battles around amortization and penny-rounding policies to facilitate this. To later questions, Matt said that the SEC wants a floating NAV for institutional MMFs but currently wants to leave retail alone (seems somewhat arbitrary choice i.e. lets only change what has been problematic before, ignore anything else and not contemplate what could happen if only we understood things better). He said that the SEC was weak and FSOC is driving the SEC to change (and FSOC itself is a pawn of the Federal Reserve).

Overall an interesting panel, particularly when you have characters such as Matt Fink who know the history and stories within the industry so well.