PRMIA put on an event at MSCI on Wednesday, called “Innovations in Liquidity Risk Management“. 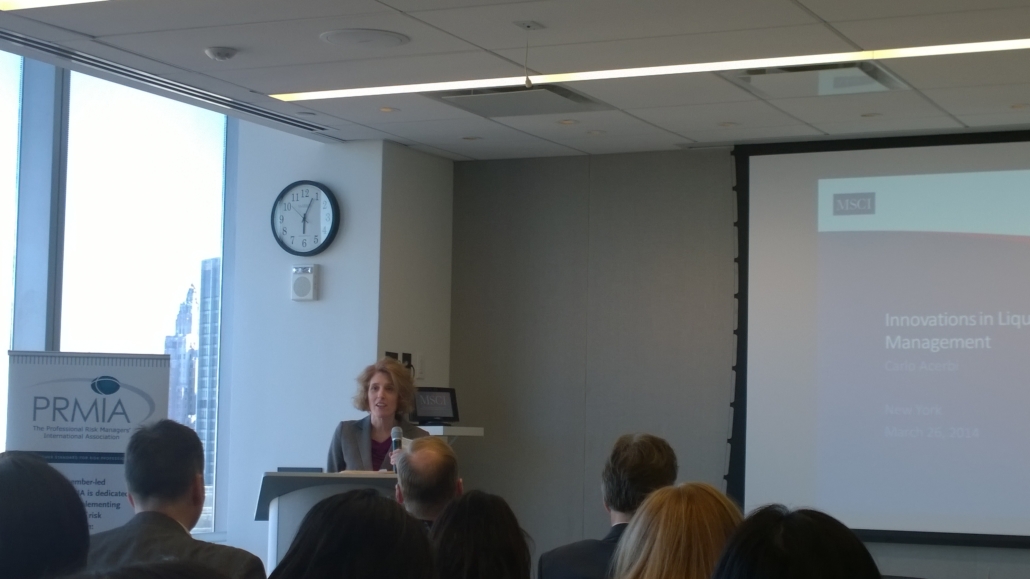 Melissa Sexton of Morgan Stanley introduced the agenda, saying that the evening would focus on three aspects of liquidity risk management:

LiquidityMetrics by MSCI – Carlo Acerbi of MSCI then took over with his presentation on “LiquidityMetrics“. Carlo said that he was pleased to be involved with MSCI (and RiskMetrics, aquired by MSCI) in that it had helped to establish and define standards for risk management that were used across the industry. He said that liquidity risk management was difficult because:

Carlo went on to clarify that liquidity risk was different depending upon the organization type/context being considered, with banks obviously focusing on funding. He said that LiquidityMetrics was focused on asset liquidity risk, and as such was more applicable to the needs of asset managers and hedge funds given recent regulation such as UCITS/AIFMD/FormPF. The methodology is aimed at bringing traditional equity market impact models out from the trading floor across into risk management and across other asset classes.

Liquidity Surfaces – LiquidityMetrics measures the expected price impact for an order of a given size, and as such has dimensions in:

The representation shown by Carlo was of a “liquidity surface” with x dimension of order size (both bid and ask around 0), y dimension of time horizon for liquidation and z (vertical) dimension of transaction cost. The surface shown had a U-shaped cross section around zero order size, at which the transaction cost was half the bid-ask spread (this link illustrates my attempt at verbal visualization). The U-shape cross section indicates “Market Impact”, its shape over time “Market Elasticity” and the limits for what it is observable “Market Depth”.

Carlo then moved to consider a portfolio of instruments, and how obligations on an investment fund (a portfolio) can be translated into the estimated transaction costs of meeting this obligations, so as to quantify the hidden costs of redemption in a fund. He mentioned that LiquidityMetrics could be used to quantify the costs of regulations such as UCITS/AIFMD/FormPF. There was some audience questioning about portfolios of foreign assets, such as holding Russian Bonds (maybe currently topical for an audience member maybe?). Carlo said that you would use both the liquidity surfaces for both the bond itself and the FX transaction (and in FX, there is much data available). He was however keen to emphasize that LiquidityMetrics was not intended to be used to predict “regime change” i.e. it is concerned with transaction costs under normal market conditions).

Model Calibration – In terms of model calibration, then Carlo said that the established equity market impact models (see this link for some background for instance) have observable market data to work with. In equity markets, traditionally there was a “lit” central trading venue (i.e. an exchange) with a star network of participants fanning out from it. In OTC markets such as bonds, there is no star network but rather many to many linkages establised between all market participants, where each participant may have a network of connections of different size. As such there has not been enough data around to calibrate traditional market impact models for OTC markets. As a result, Carlo said that MSCI had implemented some simple models with a relatively small number of parameters.

Carlo said that the effects were obviously related to the behavioural aspects of market participants. He said that the bright side for bonds (and OTC markets) was given that the trades are private there was no public information, and price movements were often constrained by theoretical pricing, therefore permanent effects could be ignored and the fair price is insenstive to trading (again under “normal” market conditions). Carlo then moved on to talk about some of the research his team was doing looking at the shape of the order book and the time needed to regenerate it. He talked of “Perfectly Elastic” markets that digest orders immediately and “Perfectly Plastic” markets that never regenerate, and how “Relaxation Time” measures in days how long the market takes to regenerate the order book. 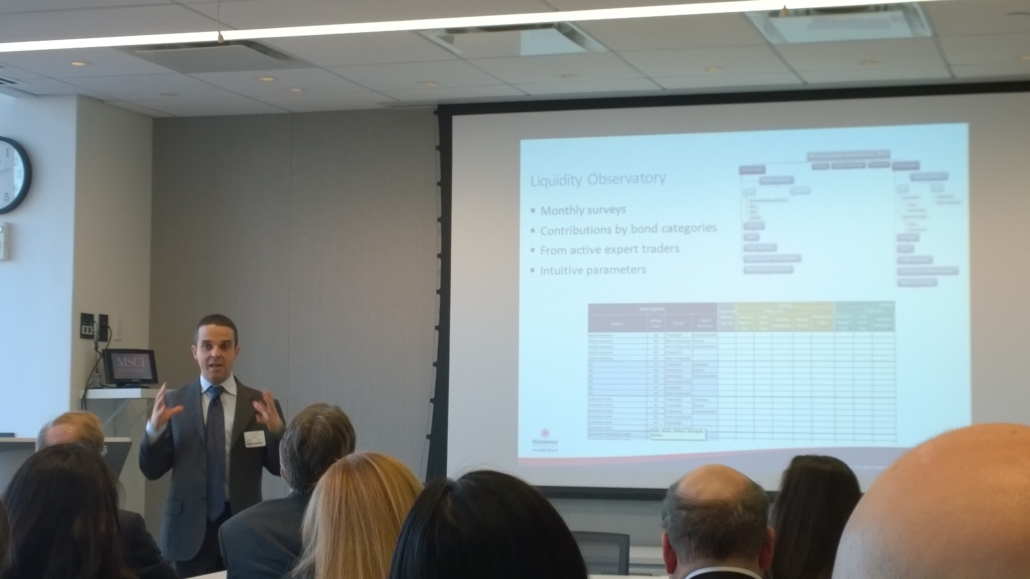 Liquidity Observatory – Carlo described how the data was gathered from market participants on a monthly basis using a spreadsheet to categorize the bond/asset class type, and again using simple parameters from active “expert” traders. Take a look at this link and sign up if this is you. (This sounded to me a lot like another “market consensus” data gathering exercise which are proving increasingly popular, such as one the first I had heard of many years back in Totem – we are not quite fully ready for “crowdsourcing” in financial markets maybe, but more people are seeing sense in sharing data.).

Panel Debate – Ron Papenek of MSCI was moderator of the panel, and asked Karen Cassidy of Morgan Stanley about her experiences in liquidity risk management.

Liqudity Risk Management at Banks – Karen started by saying that in liquidity management at Morgan Stanley they look at:

Since 2008, Karen said that liquidity management had become a lot more rigorous and formalized, being rule based and using a categorisation of assets held from highly liquid to highly illiquid. She said that Morgan Stanley undertake stress testing by market and also by idiosyncratic risk over time frames of 1 month and 1 year. As part of this they are assessing the minimum operating liquidity needed based on working capital needs.

Karen added that Morgan Stanley are expending a lot of effect currently on data collection and modelling given that their data is specific to a retail broker-dealer unit, unlike many other firms. They are also looking at metrics around financial advisors, and how many clients follow the financial advisor when he or she decides to switch firms.

Business or Regulation Driving Liquidity Risk Management – Ron asked Karen what were the drivers of their processes at Morgan Stanley. Karen said that in 2008 the focus was on fundability of assets, saying that the FED was monitoring this on a daily basis. She made the side comment that this monitoring was not unusual since “Regulators live with us anyway”. Karen said that it was the responsibility of firms to come up with the controls and best practice needed to manage liquidity risk, and that is what Morgan Stanley do anyway.

Karen added that in her view the industry was over-funding and funding too long in response to regulation, and that funding would be at lower but still pragmatic levels in the absence of regulatory pressure. Like many in the industry, Karen thought the regulation had swung too far in response to the 2008 crisis and would eventually swing back to more normal levels.

Carlo added that he had written an unintentionally prescient academic paper on liquidity management in 2008 just prior to the crisis hitting, and he thought the regulators certainly arrived “after” the crisis rather than anticipating it in any way. He thought that the banks have anticipated the regulators very well with measures such as LCR and SFR already in place.

In contrast, Carlo said that the regulators were lost in dealing with liquidity risk management for asset managers and hedge funds, with regulation such as UCITS being very vague on this topic and regulators themselves seeking guidance from the industry. He recounted a meeting he had with BaFin in 2009 where he told them that certain of their regulations made no sense and he said they acknowledge this and said the asset management industry needed to tell them what to implement (sounds like the German regulator is using the same card as the UK regulators in keeping regulations vague when they are uncertain, waiting for regulated firms to implement them to see what the regulation really becomes…).

What Have We Learnt Since 2008 – Karen said that back in 2008 liquidity was not managed to term, funding basis was not rigorous and relied heavily on unsecured debt. She said that since then Morgan Stanley had been actively involved in shaping the requirements of better liquidity risk management with more rigorous analysis of counterparties and funding capacity. Karen said that stronger governance was a foundation for the creation of better policy and process. She said that regulators were receptive to new ideas and had been working with them closely.

What will be the effect of CCPs on OTC markets? Carlo said that when executing a large order, you have the choice between executing 1) multiple small orders with multiple counterparties or 2) a single large block order with one counterparty. In this regard, the equity and bond markets are very different. In lit equity venues, the best approach is 1), but in the bond markets approach 2) is taken since the trade information is not transparent to the market.

Obviously equity markets have become more fragmented, and this has resulted in improve market quality since it is harder to get all market information and hence the market is less resonant to big events/orders. Carlo added that with the increased transparency proposed for OTC markets with CCPs etc will this improve them? His answer was that this was likely to improve the counterparty risk inherent in the market but due to increased transaparency is likely to have a negative effect on transaction costs (I guess another example of the law of unintended consequencies for the regulators).

Audience Questions – there then followed some audience questions:

LiqidityMetrics extrapolation – one audience member asked about transaction cost extrapolation in Carlo’s modelling. Carlo said that MSCI do not extrapolate and the liquidity surface terminates where the market terminates its liquidity. There was some extrapolation used along the time dimension however particularly in relation to the time-relaxation parameter.

LiquidityMetrics “Cross-Impact” – looking at applying LiquidityMetrics to a portfolio, one audience member wondering if an order for one asset distorted the liquidity surface for other potentially related assets. Carlo said this was a very interesting area with little research done so far. He said that this “cross-impact” had not been detected in equity markets but that they were looking at it in other markets such as fixed income where effective two assets might be proxies for duration related trading. Carlo put forward a simple model of where the two assets are analogous to two species of animal feeding from the same source of food.

Long and short position liquidity modelling – one audience member asked Carlo what the effects would be of being long or short and that in a crisis you would prefer to be short (maybe obviously?) given the sell off by those with long positions. Carlo clarified that being “short” was not merely taking the negative number on a liquidity surface for a particular asset but rather a “short” is a borrowing position with an obligation to deliver a security at some defined point, and as such is a different asset with its own liquidity surface.

Changing markets, changing participants – final question of the evening was from one member of the audience who asked if the general move out of fixed income trading by the banks over recent years was visible in Carlo’s data? Carlo said that MSCI only have around two years of data so far and as such this was not yet visible but his team are looking for effects like this amongst others. He added that the August 2011 weak banks – weak sovereigns in Europe was visible with signals present in the data.

Good food and good (really good I thought) wine put on by MSCI at the event reception. Great view of Manhattan from the 48th floor of World Trade Centre 7 too. 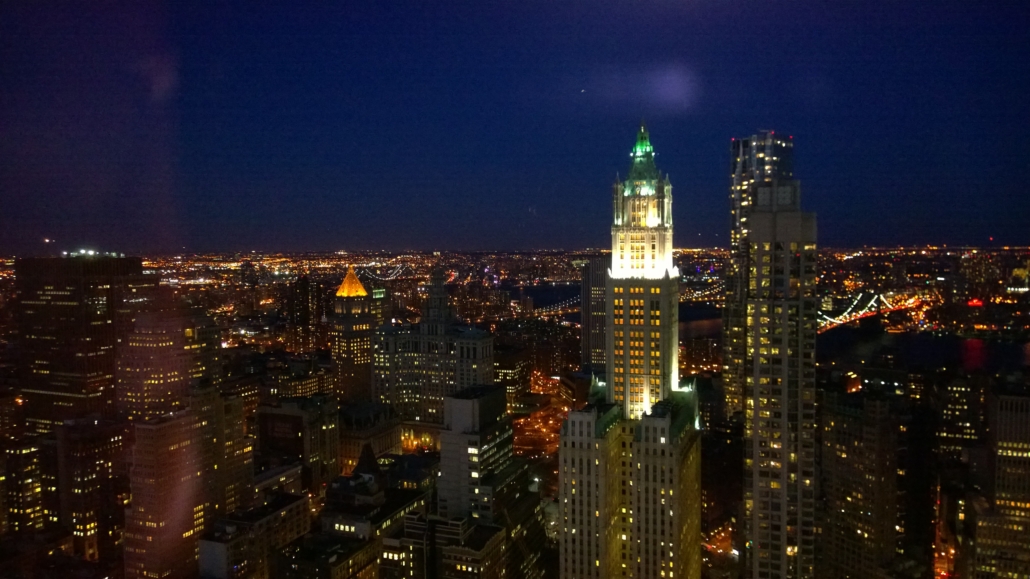