This blog post by Xenomorph CEO Brian Sentance is entitled DMS London March 2017 and was originally published on LinkedIn.

Quick thank you to the A-Team, fellow sponsors and all who attended the DMS London event on Wednesday at the Hilton Tower Bridge Hotel. It was a great day, really good to catch up with some old acquaintances and also to meet some new people. A lot of good discussions and information – a lot of which you can find on Twitter via #DMSLondon – and a few comments from me below on my highlights from the day. And obviously the A-Team will have some great coverage up on their website.

Andrew Delaney of A-Team opened the day, which included a quick survey of the biggest data management issues faced but he attendees. Maybe surprisingly, but dealing with regulation (faced by 44% of the audience) lost out to improving data quality (53%). Hany Choueiri CDO EMEA of State Street started off the talks, kicking off with describing what we are experiencing in data and technology as the “fourth industrial revolution” after steam power, electricity and the advent of computers. 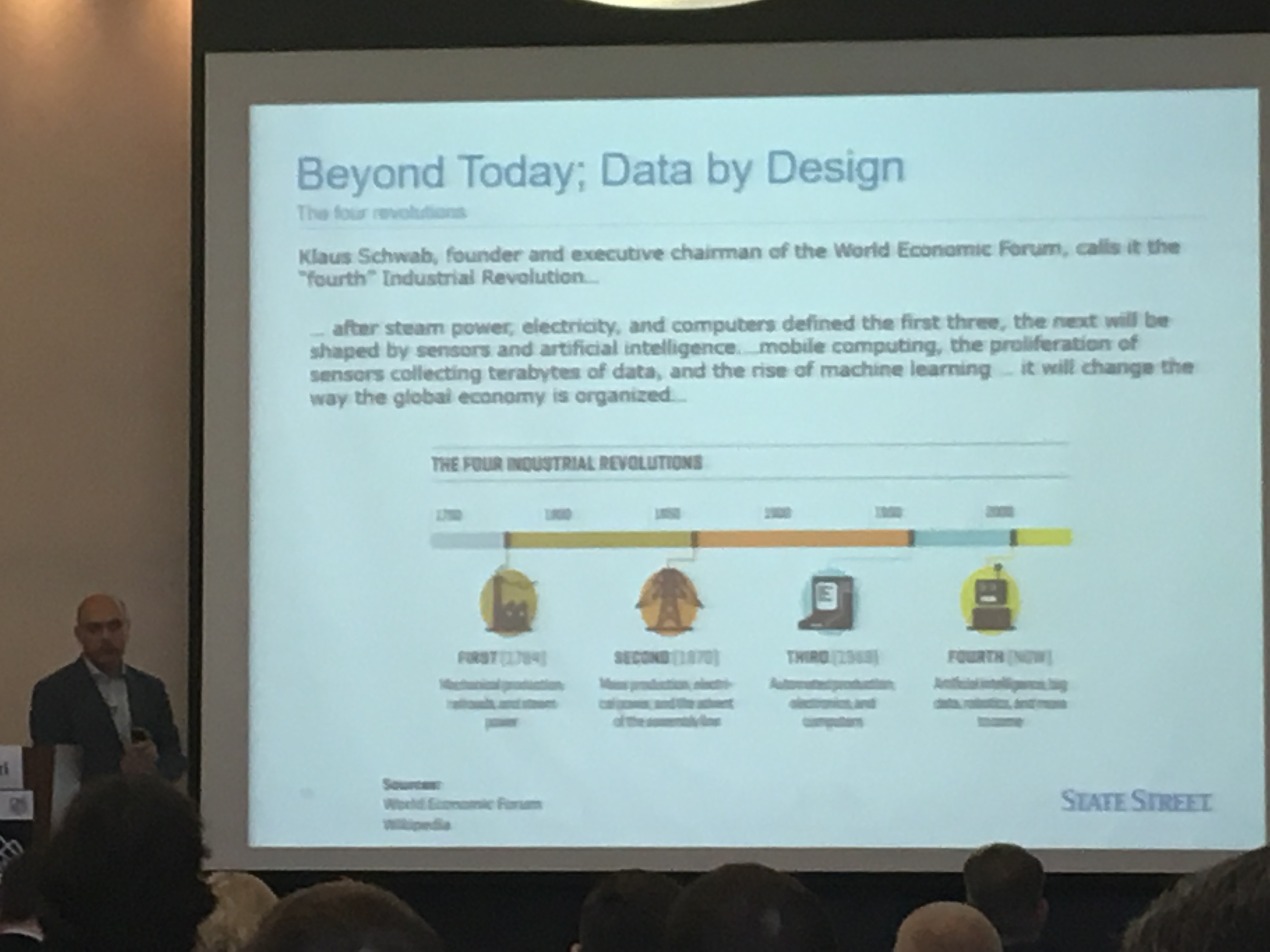 Hany suggested that one reason that there are few data standards in this fourth industrial revolution is our obsession with new technology, almost as if constantly moving to new technology is undermining any effort to get some data foundations in place to build upon. Certainly the (understandable!) desire of many IT staff to keep up to date with the latest technologies is (sometimes!) at odds with what is actually needed at some institutions, but I would suggest this is just one factor amongst many, such as business timelines being out of step with technology timelines, culture and the simple fact that a quick tactical solution to a data problem sorts things for now, postponing and augmenting the problem as something other people have to fix at some later date. Kind of reminds me of the dilemma of global warming – even if you accept the findings of the scientific community that this is happening, it is unlikely it will greatly affect you badly within your lifetime (or at least at my age it means that!). 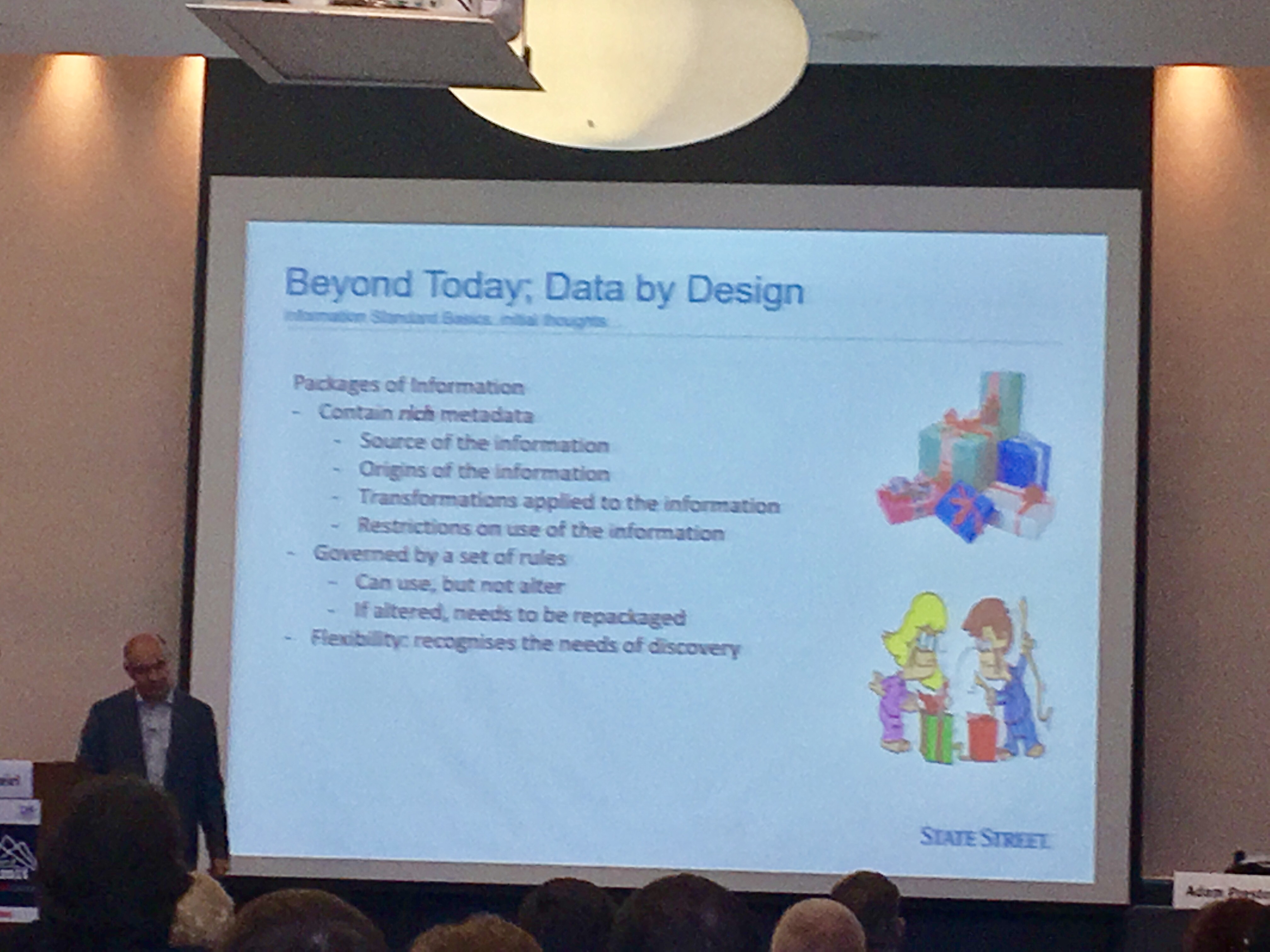 Hany put a good slide on how data should be packaged up so that where it comes from and where it goes to can be more easily understood. In many ways he was addressing head on many of the “data as water” issues in one of my earlier posts on how data flows through an organisation.

Hany also participated in the CDO panel that followed his keynote, during which one of the panelists said that having nobody in the business who could answer data related questions defined the need for a Chief Data Officer. A panelists put forward a great definition of data governance as “stopping people doing stupid stuff” with data. 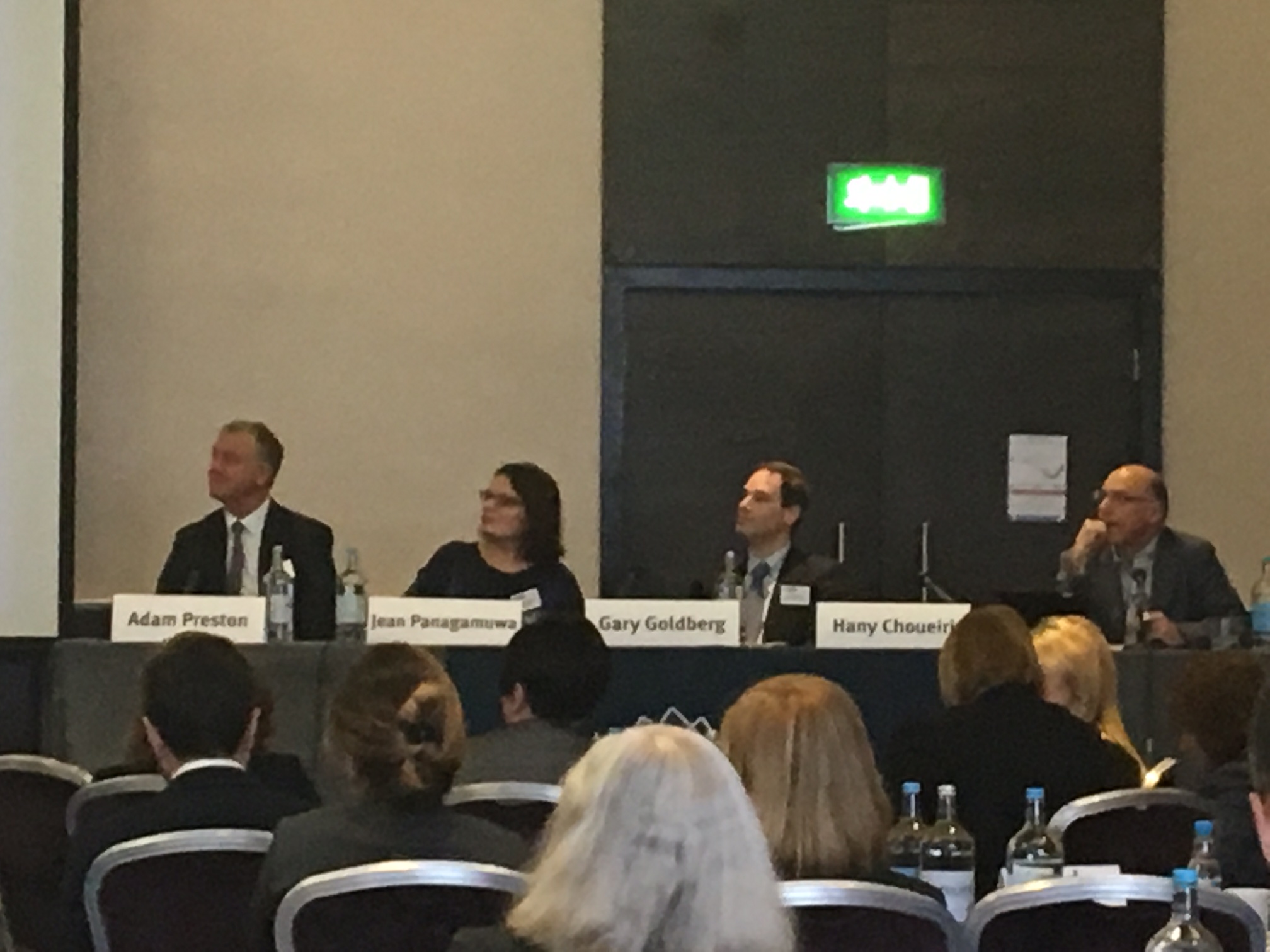 A key section of the conversation revolved around “Agile” methodologies for delivery and seeing whether the CDO could be the sponsor of deliberate delays in delivery so as the extra time could be used to deliver better solutions, ones that better fit within an institution’s overall data architecture. One of the panelists put it a different way, which was “going slower short-term to go faster long-term”. As ever, getting a culture right around viewing data governance as an asset and not as a threat to the business was discussed.

I think at a couple of points I did get slightly volatile (but hopefully not too uncertain!) in the panel I participated in: “Reviewing the regulatory landscape in volatile and uncertain times” (shown in the photograph below). Regardless it was good fun, particularly to meet the other panelists and the moderator Selwyn Blair-Ford. One of the panelists mentioned that “We have never had it so good” for using regulatory and competitive pressures to drive through much needed changes in attitudes and approaches to data management. 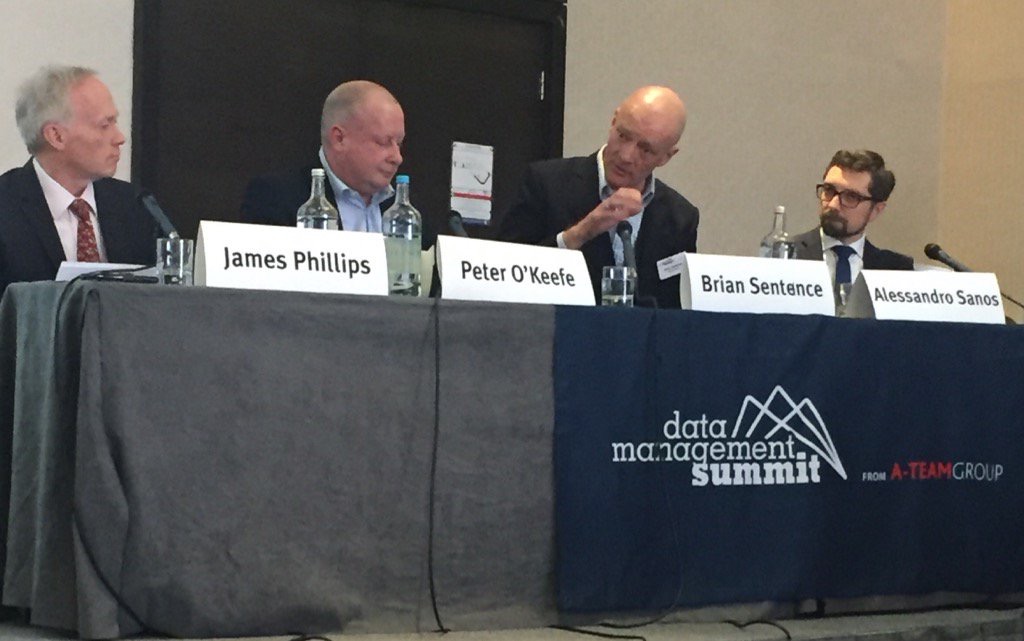 Unfortunately, Francis Gross of the ECB had his flight delayed due to fog, and arrived just after the panel finished. Francis had a few points that were relayed at the panel, including that solving the data quality issue in finance should be a combined effort between public and private sector, and that no amount of isolated effort would overcome the challenges that have built up in the industry over many years. Francis suggested that concentrated effort on a few key areas that have the most transformational power was the correct approach, and cited LEI as one prime example of this. He also suggested that technologists and the data-savvy should speak up and “educate” the more data-remote leaders in both public and private sector finance, and that this was more of a cultural problem where technologists don’t have enough of a say.

Talking about digital banking and technology enablers, I put forward that the speed of deployment on cloud was in stark contrast to how long it takes for infrastructure to be installed and running at some major institutions, and how in terms of solution delivery it was becoming more and more compelling given the plug and play nature of many of the services now being provided by the major players. The panel talked about open APIs and how regulators could try to act as a catalyst to get more innovation going.

There was some discussion of whether “RegTech” was a “thing” or not, and whether financial technology has always been RegTech and FinTech regardless of these fashionable names. I thought it funny that on Twitter some bloke supposedly called @ReginaldTech said “Apparently I’m just a #buzzword.” AI was mentioned as a way of automating some of the more boring/mundane aspects of data governance – and picking up on the “boring” word then Andrew Delaney advocated the creation of “GovTech” as a new buzzword, so let’s see if that flies.

I must say that my time was taken up in the afternoon, so I did not get to see as much of the panels as I would like (check out the www.datamanagementreview.com website and #DMSLondon on twitter for more). So fast forward to drinks, so here we find Fatma Aytemur of Nomura together with Andrew Hawa of Misato systems enjoying some conversation. 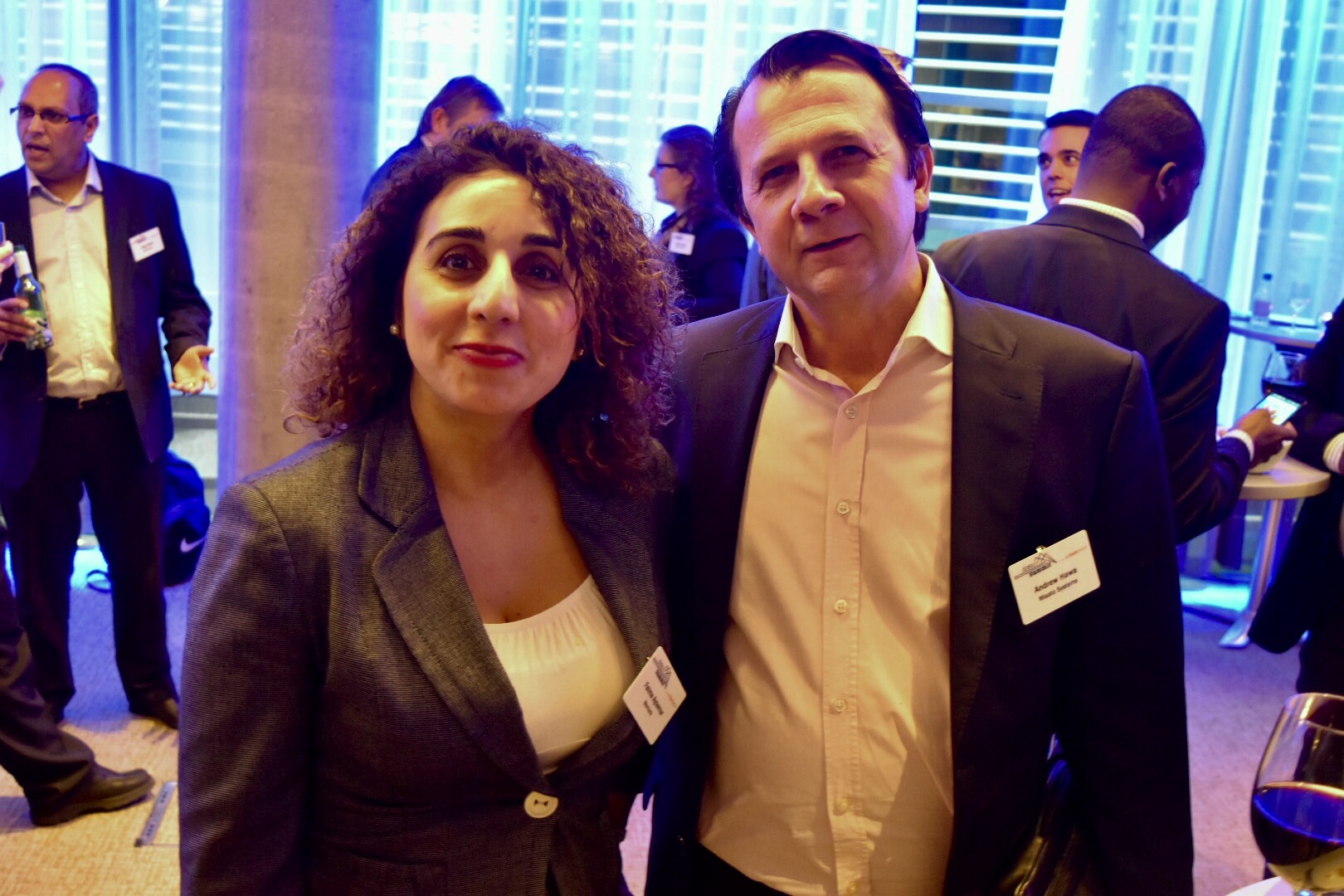 And here is Anthony Greene, together with Nick Taplin of Duco with a vaguely (garishly?) disco like background… 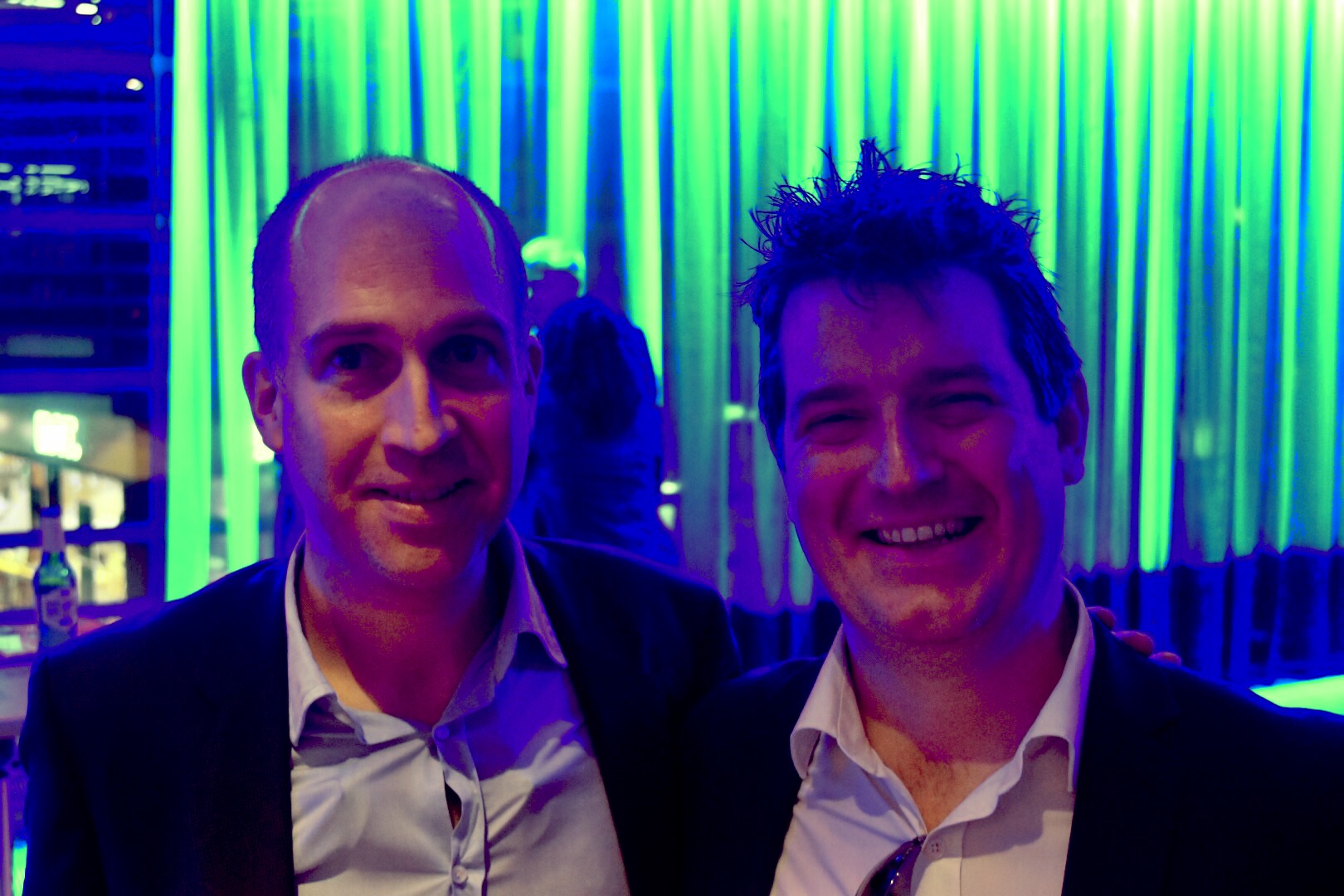 Xenomorph did a prize draw for some Beats X wireless headphones (quick reminder that EDM can mean Electronic Dance Music to some…) and this was won by Naomi Shaw of Deutsche Bank, pictured here with yours truly… 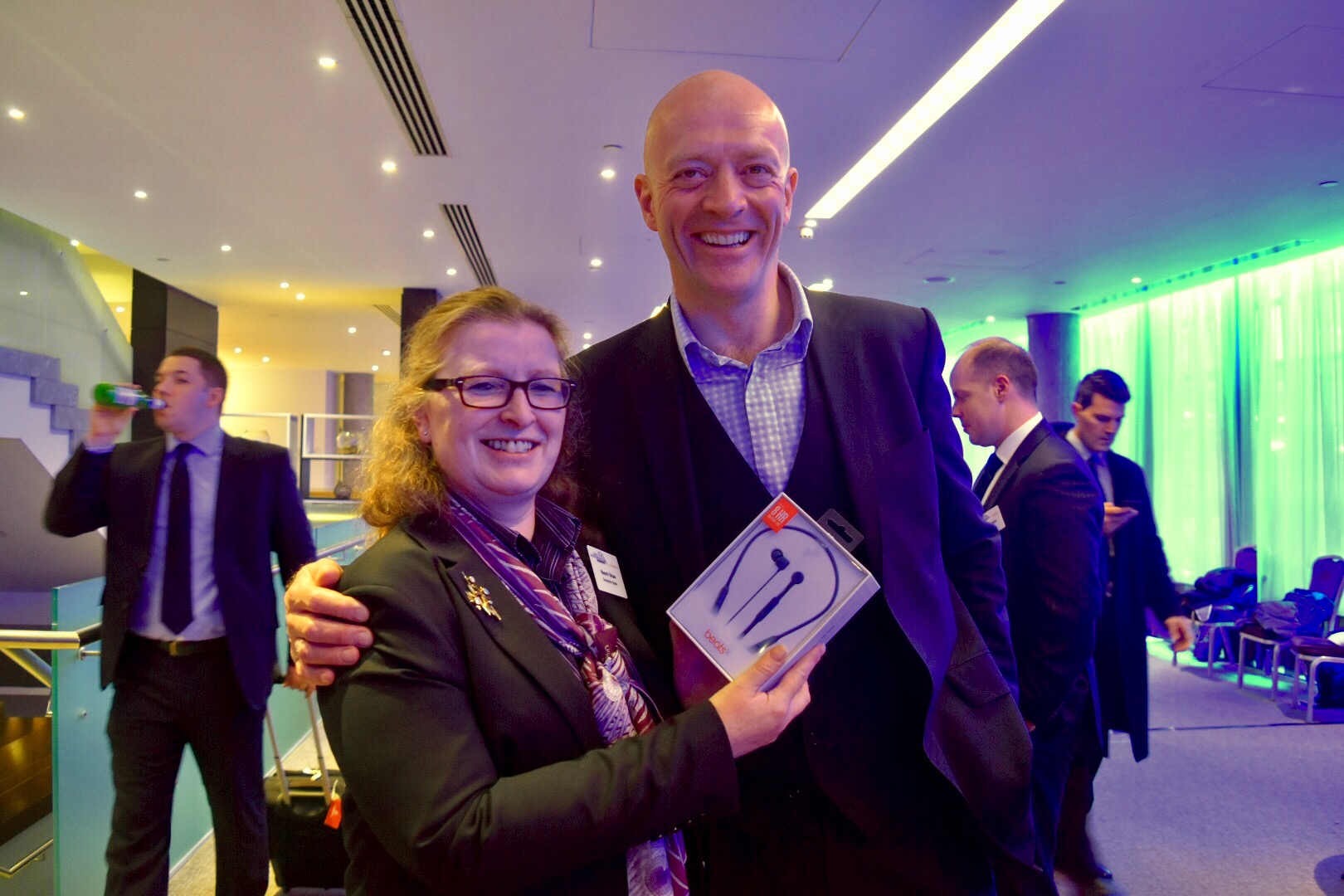 And so finally big thank you to all who attended, and a big thank you to Angela, Andrew and all of the A-Team for a great day, including a couple of the key “make it happen” people pictured below, Jeri-Anne and Leigh. 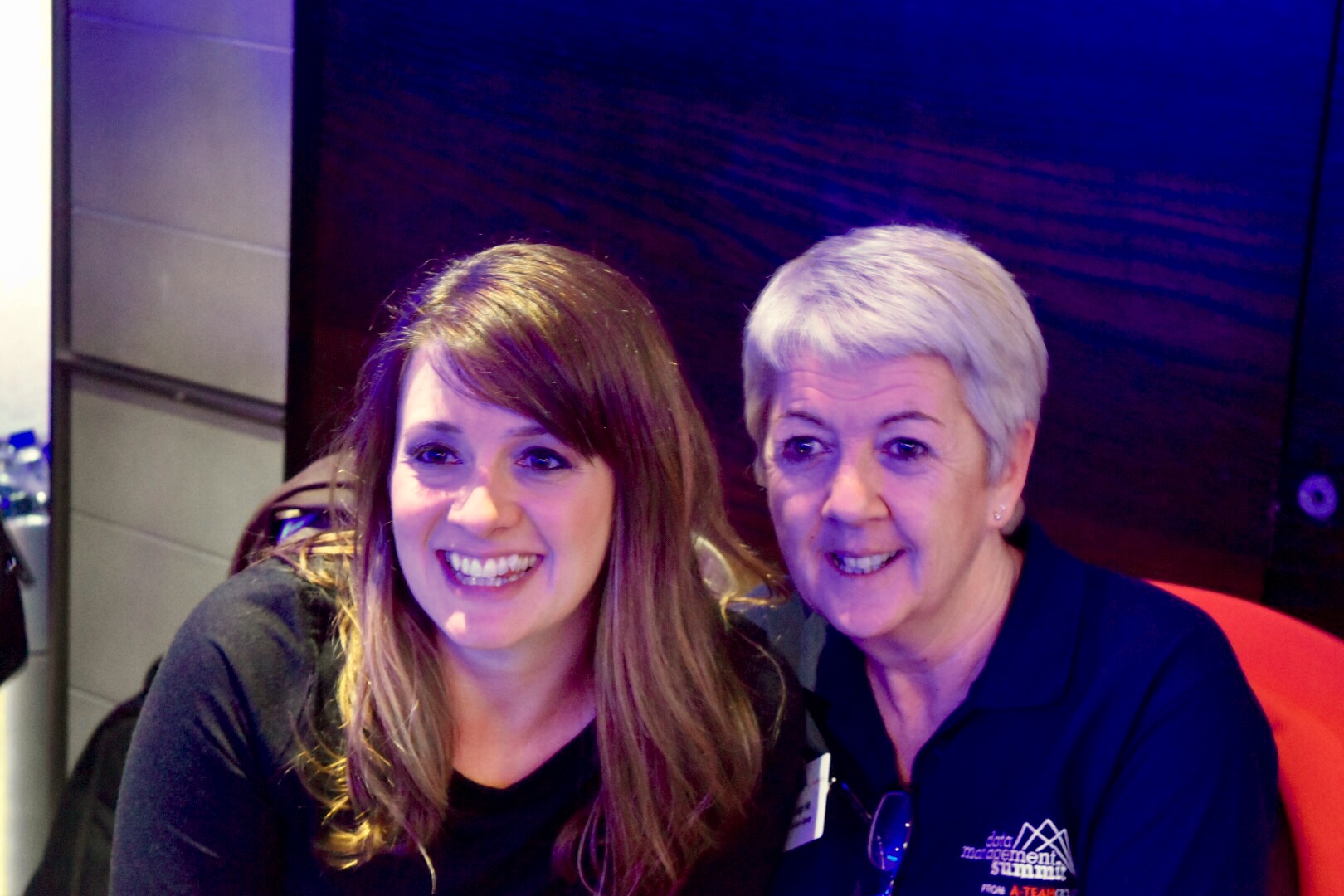