Good day at the A-Team’s DMS London event last Wednesday. The day started with Tom Dalglish doing a pretty passable impression of a stand-up comedian in the morning keynote to open the day – not exactly an easy thing to do if 1) you are asked to do it very much at the last minute and 2) this is data management, not the subject that most comedians would immediately reach out for. So due kudos to Tom, and some of the comments he made about technology architects and technology builders were funny and resonated with the audience, such as this quote coming from a technologist: “How can I give you the requirements, I haven’t finished the code yet?” (I think we have all been there on that one a few times in our careers…).

You can find some of the main points from the various panels at via @XenomorphNews or more generally by #dmslondon (you could also find out a bit via my twitter account @TheLongSentance so long as you don’t mind the odd photograph and a few bits of personal baggage now and again).

BCBS239 Panel – I took part in the panel on BCBS239 on risk data aggregation and reporting, something which I have written about before, and obviously a prime example of how regulation is influencing (dictating?) financial markets institutions to take data management seriously. Dennis Slattery of EDMWorks moderated the panel, and on the panel with me was Sally Hinds of DCMS, and Mikael Soboen, head of risk systems at BNP Paribas. 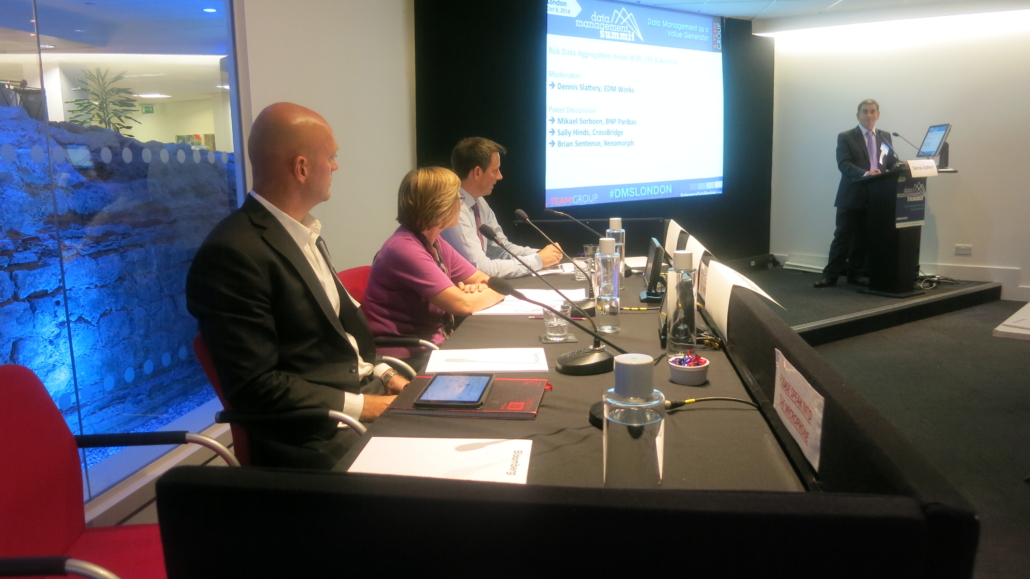 Dennis started by outlining the four pillars of BCBS239:

Regulatory Chicken – Dennis started by asking the panel whether BCBS was another game of regulatory “chicken” where the approach of “principles” means 1) the banks do the minimum and wait for the banks to inspect and tell them what they specifically have to do 2) the regulators don’t really want to be more specific beyond principles because they themselves are unsure of what is needed and want to learn from what different banks have done. General concensus from the panel debate was that firms were not doing as much as they could, but that banks needed to show at least that they had a program in place and running by the January 2016 deadline or face big issues with the regulators (so the game of regulatory chicken is “on” seems to be the conclusion). Mikael Soboen added that he was unsure whether his regulator would have the time to conduct the BCBS239 given the workload that the regulators currently faced.

The End of Spreadsheets? – Dennis asked whether BCBS239 and the requirements for having a clear data lineage meant this sounded the bell for the end of spreadsheet usage at banks. I said not – I personally feel that a lot of folks in technology underestimate how difficult using software is for many business users and tools that make manipulating data easy like spreadsheets will have a role for the foreseeable future. I suggested that spreadsheets are a great adhoc reporting and analysis tool, and things mainly go wrong when they are used as a personal, “siloed” desktop database.

BCBS239 does not itself preclude the usage of spreadsheets and end user computing, but rather like a lot of regulation says that their usage must be taken seriously – in my view there is a tendency for some in IT to regard spreadsheets as someone else’s problem, which is understandable but problematic for any CDO. Also there are approaches to spreadsheet usage that can help maintain data lineage, such as what Microsoft offers with web provision of spreadsheet dashboards using PowerView and PowerBI (used in our TimeScape MarketPlace offering), folks such as Cluster7 with their “closed circuit TV” for spreadsheet monitoring, and indeed Xenomorph with our SpreadSheet Inside approach of including centralised spreadsheet-like calculations as a supported data type within the audited data management process.

Data Dictionary – Mikael said that one responsibility he had was to represent the investment bank within the wider data dictionary initiatives due to BCBS239 at the retail bank, and said that this was challenging given the different terminology sometimes used.

Is BCBS239 a Project or Data Governance? – The panel thought that the best approach was to use BCBS239 as a framework for compliance with current regulation and regulation to come, but that this needs to obviously be subject to having the budget to do so. There were some general comments on how the data management needs of the front office and risk were converging. Standards such as FIBO were also discussed, with feedback being that they are desirable but that it is early days where their immaturity means they are often used for specific areas such as modeling counterparty data.

Overall a good panel (I hope!) with a good amount of audience questions and participation. Again you can find some of the main points from the various panels at via @XenomorphNews or more generally by #dmslondon (you could also find out a bit via my twitter account @TheLongSentance so long as you don’t mind the odd photograph and a few bits of personal baggage now and again). 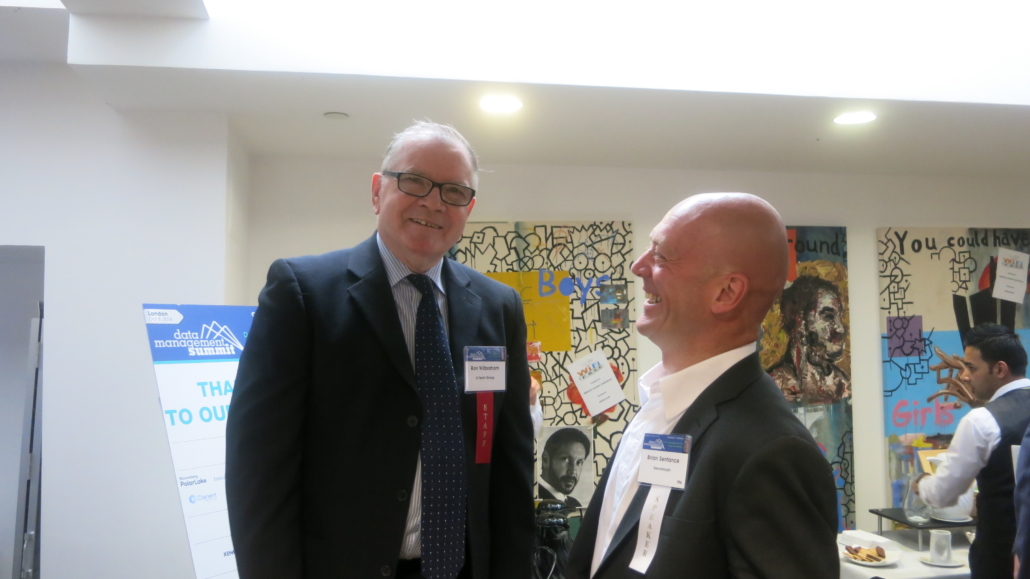